Throwback Thursday on the Blog: How We Met

Normally, Throwback Thursday is an Instagram thing and a hashtag (#tbt or #throwbackthursday). But I found the entire story of how Scott and I ended up together today and thought I’d post it. 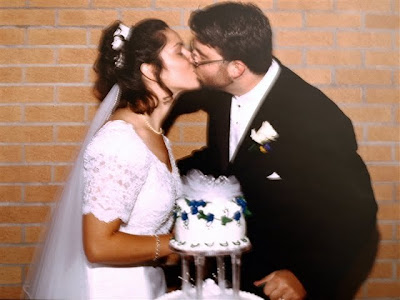 It was 1996 at Cedarville College, and I was a sophomore. “The Mikes” (Mike E and Mike M) sat behind me and my best friend Heather in World Lit class that fall quarter. They were a comedy duo, two years older than us, and yet for some reason, they like us and included us in their goofiness. We picked and bantered, teased and joked the whole quarter, somehow incorporating the professor enough to avoid getting in trouble.

I needed the light-heartedness that quarter. I was floundering in the midst of a really sucky year of school. I was a resident assistant (R.A.) in the dorm and having trouble with some of the girls, went out with some less-than-savory guys, and eventually decided that I needed to steer clear of guys named Scott. I half-hoped that maybe one of The Mikes would ask me out, but unless you count a couple of brotherly (and much-needed) “I can tell you need to talk to someone” dinners, I didn’t get a single date out of either of them.

The Mikes were close friends with Scott (of course), a senior in the Professional Writing program. Mike E had been his roommate for a couple of years, so he knew that Scott had had his heart broken already. He had been engaged the previous year, but that summer, his fiancée broke off their engagement. When he returned to college, he was burned, gun-shy, and very much not looking.

However, when The Mikes had other plans. When they walked into World Lit the first day and met me, they decided that I was The One for Scott, and they took matters into their own hands.

It was February, cold, and dark. I had attended the mandatory Wednesday night chapel service and was procrastinating returning to my dorm to work on projects when Scott walked up to me.

“Joy, hey, I am the secretary for the writing organization [we didn’t have fraternities, being a conservative Christian college and all]. You were nominated to be secretary at last meeting. I am supposed to talk you about it before the election.”

“Oh! Ok. What would I have to do?” I knew who Scott was because he was friends with The Mikes, but I hadn’t really talked to him before that night. He sort of intimidated me. He looked and acted like a real grown up. He was senior, about to graduate, wore a full beard, and carried himself like an adult. I was a silly college sophomore girl, in way over her head with R.A. responsibilities, trying to eke out as much fun as possible in between projects and part-time jobs. It never occurred to me that he’d notice me, let alone give me a second thought.

“Ok, sounds easy enough. Do I need to campaign or anything?”

He grinned. “No, everyone will vote at the next meeting, and then we’ll see what happens.”

“Thanks! I’ll wait and see then.” I grabbed my book bag and walked out a side door towards my dorm. Within minutes of entering my room, the phone rang.

“Hi Scott.” He must have forgotten to tell me something.

“I have a couple of tickets to the symphony this weekend, and I wondered if you’d like to go with me?”

That was unexpected. I paused while my brain took it all in.

Uhhhhhhh….. this isn’t about the officer election…. he is actually asking me out. For real? A grown-up is asking me out on a real grown-up date? Didn’t see that one coming. Oh crap… you’re not saying anything. Come up with a coherent reply, Joy, before he dies or hangs up.

So much for my resolution to never date a guy named Scott.

To be continued tomorrow